Barbara is of English/Scottish colonial/settler decent born on unceded land - the site of interaction and meeting between the Nari Nari people of the lower Murrumbidgee River and the Wiradjuri people who inhabit a vast region of central NSW. The meeting place was first named by European Settlers in the1820’s as Lang’s Crossing and became a well-travelled European stock route, that became the township of Hay.

She moved to Ngunnawal country in 1992 where she has worked, studied and volunteered in a range of government and community organisations and services throughout the years. It is on this country that she has remained engaged and connected to the Wiradjuri mob through her kin caring and extended family.

Barbara actively seeks to bring the voices of those she works with into her work across policy, practice and research. Her interest in undertaking a PhD that was focused on children’s experiences, was a long-term discomfort (grounded both in lived experience of her caring role and her direct social work practice) in how the construction and decisions made in the adult world are experienced by children and young people. And a curiosity as to how the emerging discourse on the need to listen to children in childhood studies was being experienced in the real worlds of children. She completed her PhD in 2019.

In her capacity as a social worker, Barbara is currently working in the Aboriginal and Torres Strait Islander Program, Victim Support, ACT Human Rights Commission. In this role she works beside the Aboriginal Liaison Officer in the context of the Aboriginal and Torres Strait Islander Community including the co-facilitation of therapeutic yarning circles for women in the AMC and in the community; provision of individual trauma counselling with individuals, men, women and children in the community and detainees and sentenced prisoners in the AMC; and providing culturally safe support for clients as they access other services, including justice processes.

Prior to Victim Support, Barbara worked for six years with ACT Corrective Services, across policy, direct practice and program development.

It was her first direct practice work as a community mental health outreach worker where she developed her passion and commitment to ensuring that the people we work with are actively involved in the design, development, implementation and evaluation of our services and programs.  During this time, she worked closely with the emerging Mental Health consumer network. It was also in this role that she became acutely aware of the way in which the provision of services does not always consider the experiences of children.

Barbara has been involved with the Australian Catholic University as a student, researcher and in a teaching capacity since 2001. From the completion of her social work degree in 2002 Barbara has remained an active part of the ACU Social Work School teaching staff, tutoring and lecturing in a range of subjects at both undergraduate and masters level.  Barbara has most recently lectured in the Cross-Cultural Social Work and Aboriginal and Torres Strait Islander Social Work units for Social Work Master Students. 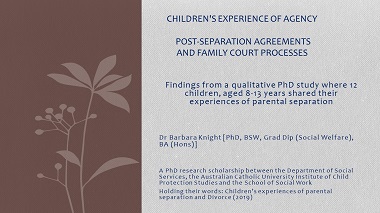 
No presentations found for today.

Please fill out the form to send a message to the author.

This presentation is also available in PDF format. Please provide your email address below, and our system will send the PDF to you.

Comments will be sent to the presenter, and can be seen by the other judges.